Home » Astronomy » Cassini Mission: Saturn’s Rings May Not Have Existed During Era of T Rex

Cassini Mission: Saturn’s Rings May Not Have Existed During Era of T Rex

“We see so much more, and closer up, and we’re getting new and more interesting puzzles,” said NASA’s Ames Research Center’s Jeff Cuzzi, who’s been studying Saturn’s rings since the 1970s and is the interdisciplinary scientist for rings on the Cassini mission. “We are just settling into the next phase, which is building new, detailed models of ring evolution—including the new revelation from Cassini data that the rings are much younger than Saturn.”

As NASA’s Cassini dove close to Saturn in its final year, the spacecraft provided intricate detail on the workings of Saturn’s complex rings, new analysis shows.

Data from the Cassini mission shows that Saturn’s rings may be only 10 to 100 million years old. They may not have been there during the reign of the dinosaurs, and may be a fairly recent development in our Solar System.

Cassini gathered this data during its final orbits around Saturn in 2017, 13 years after arriving at the gas giant. As it ran out of fuel , the Cassini team sent the spacecraft into a series of 22 super-close orbits between Saturn and its rings, 2600-3900 km (1600-2400 miles) above the cloud tops. The data from those dives led scientists to this new age estimate for Saturn’s rings.

“Unexplainable” –Cassini Mission’s Amazing Discovery in the Plumes of Enceladus

Although the mission ended in 2017, science continues to flow from the data collected. A new paper published June 13 in Science describes results from four Cassini instruments taking their closest-ever observations of the main rings.

Findings include fine details of features sculpted by masses embedded within the rings. Textures and patterns, from clumpy to strawlike, pop out of the images, raising questions about the interactions that shaped them. New maps reveal how colors, chemistry and temperature change across the rings.

Like a planet under construction inside a disk of protoplanetary material, tiny moons embedded in Saturn’s rings (named A through G, in order of their discovery) interact with the particles around them. In that way, the paper provides further evidence that the rings are a window into the astrophysical disk processes that shape our solar system. 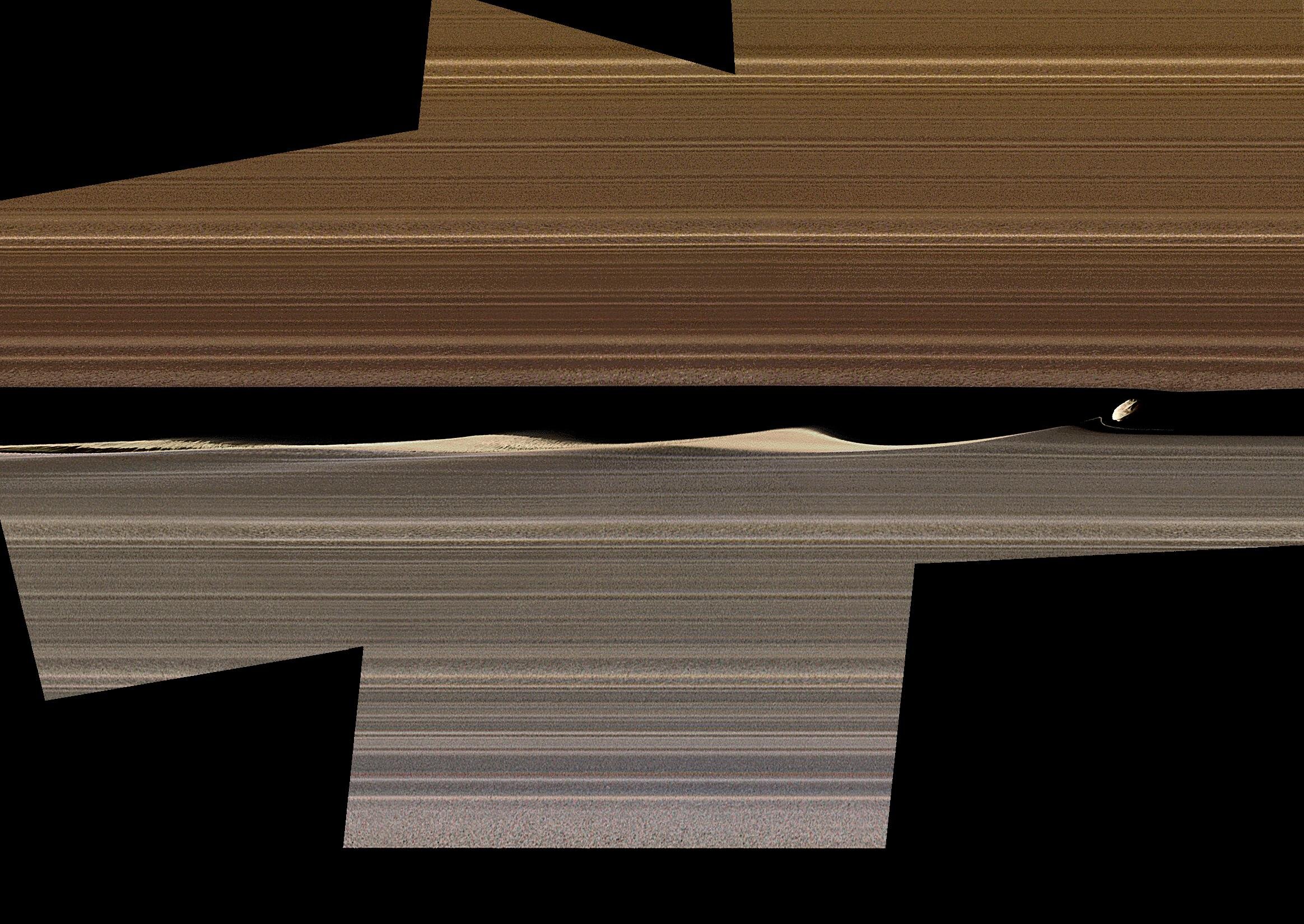 A false-color image mosaic shows Daphnis, one of Saturn’s ring-embedded moons, and the waves it kicks up in the Keeler gap. Images collected by Cassini’s close orbits in 2017 are offering new insight into the complex workings of the rings. Credit: NASA/JPL-Caltech/Space Science Institute.

The observations also deepen scientists’ understanding of the complex Saturn system. Scientists conclude that at the outer edge of the main rings, a series of similar impact-generated streaks in the F ring have the same length and orientation, showing that they were likely caused by a flock of impactors that all struck the ring at the same time. This shows that the ring is shaped by streams of material that orbit Saturn itself rather than, for instance, by cometary debris (moving around the Sun) that happens to crash into the rings.

“These new details of how the moons are sculpting the rings in various ways provide a window into solar system formation, where you also have disks evolving under the influence of masses embedded within them,” said lead author and Cassini scientist Matt Tiscareno at the SETI Institute.

At the same time, new puzzles have arisen and old mysteries have deepened with the latest research. The close-up ring images brought into focus three distinct textures—clumpy, smooth and streaky—and made it clear that these textures occur in belts with sharp boundaries. But why? In many places the belts aren’t connected to any ring characteristics that scientists have yet identified. 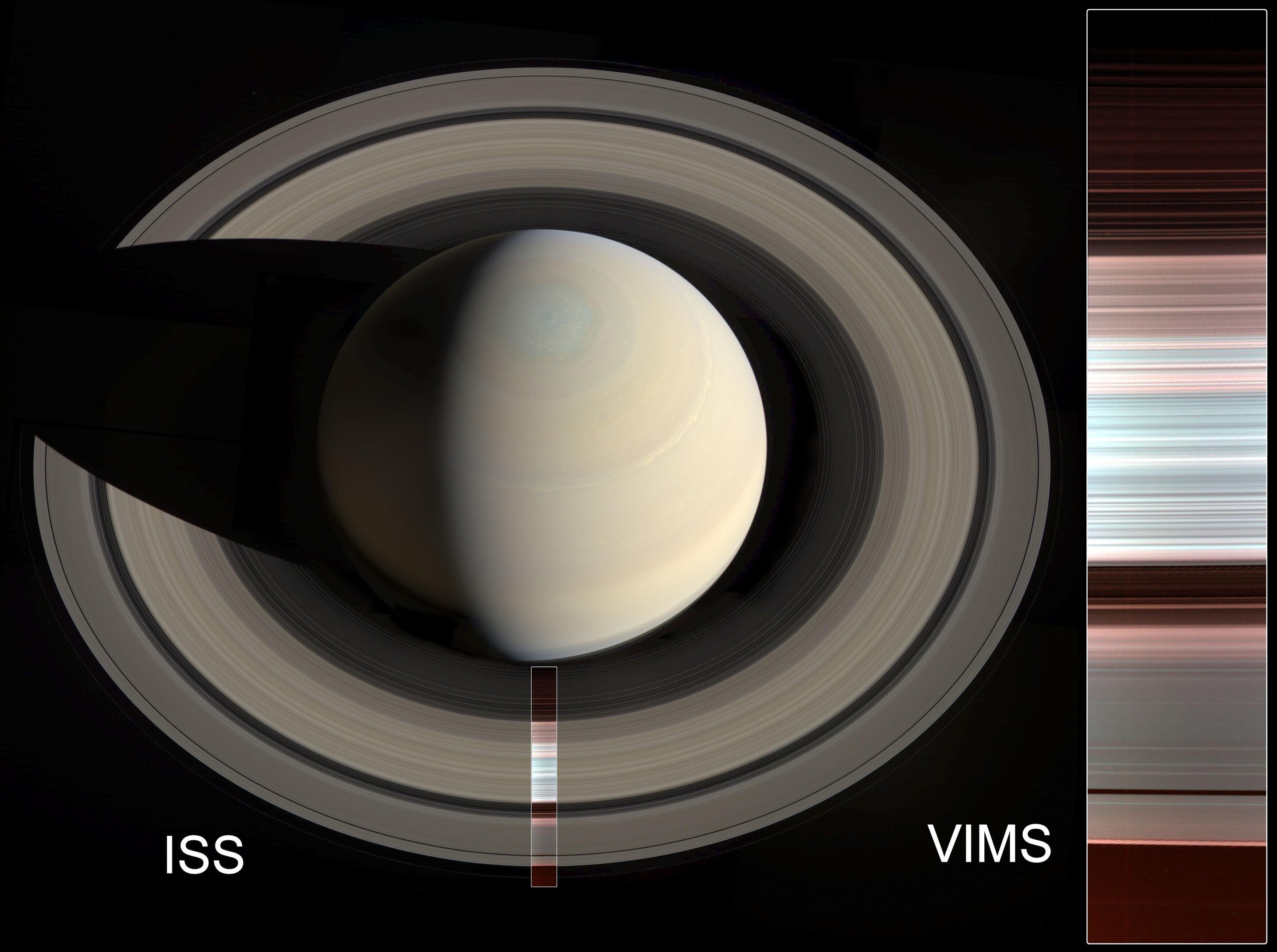 “This tells us the way the rings look is not just a function of how much material there is,” Tiscareno said. “There has to be something different about the characteristics of the particles, perhaps affecting what happens when two ring particles collide and bounce off each other. And we don’t yet know what it is.”

The data analyzed were gathered during the Ring Grazing Orbits (December 2016 to April 2017) and the Grand Finale (April to September 2017), when Cassini flew just above Saturn’s cloud tops. As the spacecraft was running out of fuel, the mission team deliberately plunged it into the planet’s atmosphere in September 2017.

Cassini’s Visible and Infrared Mapping Spectrometer (VIMS) uncovered another mystery. The spectrometer, which imaged the rings in visible and near-infrared light, identified unusually weak water-ice bands in the outermost part of the A ring. That was a surprise, because the area is known to be highly reflective, which usually is a sign of less-contaminated ice and thus stronger water ice bands.

The new spectral map also sheds light on the composition of the rings. And while scientists already knew that water ice is the main component, the spectral map ruled out detectable ammonia ice and methane ice as ingredients. But it also doesn’t see organic compounds—a surprise, given the organic material Cassini has discovered flowing from the D ring into Saturn’s atmosphere.

“If organics were there in large amounts—at least in the main A, B and C rings—we’d see them,” said Phil Nicholson, Cassini VIMS scientist of Cornell University in Ithaca, New York. “I’m not convinced yet that they are a major component of the main rings.”

The research signals the start of the next era of Cassini science, said Cuzzi.

The new observations give scientists an even more intimate view of the rings than they had before, and each examination reveals new complexities, said Cassini Project Scientist Linda Spilker, based at NASA’s Jet Propulsion Laboratory.

“It’s like turning the power up one more notch on what we could see in the rings. Everyone just got a clearer view of what’s going on,” Spilker said. “Getting that extra resolution answered many questions, but so many tantalizing ones remain.”