“The Hubble tension between the early and late universe may be the most exciting development in cosmology in decades,” said lead researcher and Nobel laureate Adam Riess of the Space Telescope Science Institute (STScI) and Johns Hopkins University, about new Hubble Space Telescope data that suggest a faster expansion rate in the modern universe than expected, based on how the universe appeared more than 13 billion years ago strengthening the case that new theories may be needed to explain the forces that have shaped the cosmos.

“This mismatch has been growing and has now reached a point that is really impossible to dismiss as a fluke. This disparity could not plausibly occur just by chance,” adds Riess.

The measurements of the early universe come from the European Space Agency’s Planck satellite. This discrepancy has been identified in scientific papers over the last several years, but it has been unclear whether differences in measurement techniques are to blame, or whether the difference could result from unlucky measurements.

The universe is getting bigger every second. The space between galaxies is stretching, like dough rising in the oven. But how fast is the universe expanding? As Hubble and other telescopes seek to answer this question, they have run into an intriguing difference between what scientists predict and what they observe.

The latest Hubble data lower the possibility that the discrepancy is only a fluke to 1 in 100,000. This is a significant gain from an earlier estimate, less than a year ago, of a chance of 1 in 3,000. These most precise Hubble measurements to date bolster the idea that new physics may be needed to explain the mismatch.

This illustration shows the three basic steps astronomers use to calculate how fast the universe expands over time, a value called the Hubble constant. All the steps involve building a strong “cosmic distance ladder,” by starting with measuring accurate distances to nearby galaxies and then moving to galaxies farther and farther away. This “ladder” is a series of measurements of different kinds of astronomical objects with an intrinsic brightness that researchers can use to calculate distances. Credit: NASA, ESA, and A. Feild (STScI)

Tightening the bolts on the ‘cosmic distance ladder’

Scientists use a “cosmic distance ladder” to determine how far away things are in the universe. This method depends on making accurate measurements of distances to nearby galaxies and then moving to galaxies farther and farther away, using their stars as milepost markers. Astronomers use these values, along with other measurements of the galaxies’ light that reddens as it passes through a stretching universe, to calculate how fast the cosmos expands with time, a value known as the Hubble constant. Riess and his SH0ES (Supernovae H0 for the Equation of State) team have been on a quest since 2005 to refine those distance measurements with Hubble and fine-tune the Hubble constant.

In this new study, astronomers used Hubble to observe 70 pulsating stars called Cepheid variables in the Large Magellanic Cloud. The observations helped the astronomers “rebuild” the distance ladder by improving the comparison between those Cepheids and their more distant cousins in the galactic hosts of supernovas. Riess’s team reduced the uncertainty in their Hubble constant value to 1.9% from an earlier estimate of 2.2%. 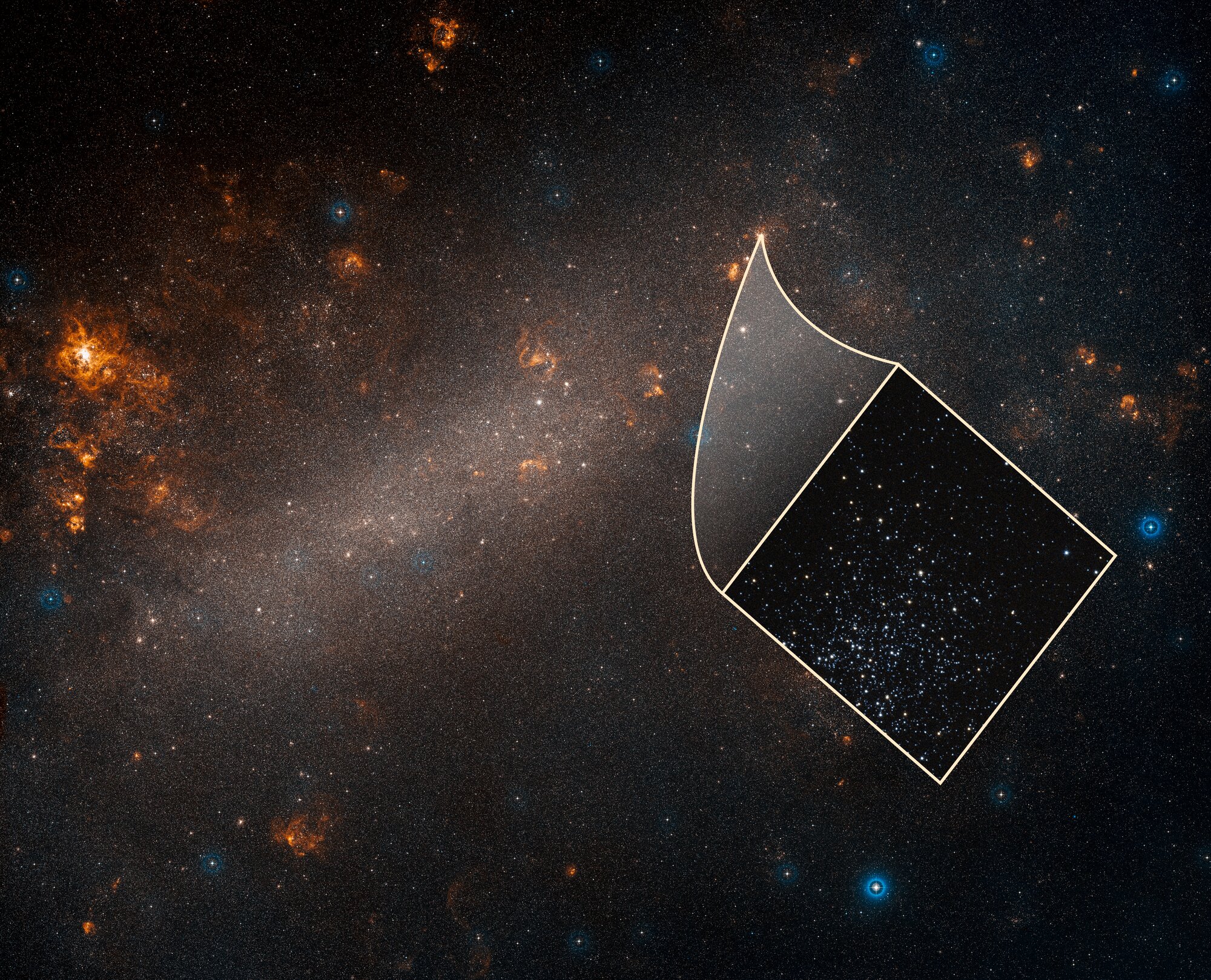 Ground-based telescope’s view of the Large Magellanic Cloud, a satellite galaxy of our Milky Way. The inset image, taken by the Hubble Space Telescope, reveals one of many star clusters scattered throughout the dwarf galaxy. Credit: NASA, ESA, Adam Riess, and Palomar Digitized Sky Survey

As the team’s measurements have become more precise, their calculation of the Hubble constant has remained at odds with the expected value derived from observations of the early universe’s expansion. Those measurements were made by Planck, which maps the cosmic microwave background, a relic afterglow from 380,000 years after the big bang.

Beyond Hubble’s Constant –“A New Age of the Universe”

The measurements have been thoroughly vetted, so astronomers cannot currently dismiss the gap between the two results as due to an error in any single measurement or method. Both values have been tested multiple ways.

“This is not just two experiments disagreeing,” Riess explained. “We are measuring something fundamentally different. One is a measurement of how fast the universe is expanding today, as we see it. The other is a prediction based on the physics of the early universe and on measurements of how fast it ought to be expanding. If these values don’t agree, there becomes a very strong likelihood that we’re missing something in the cosmological model that connects the two eras.”

How the new study was done

Astronomers have been using Cepheid variables as cosmic yardsticks to gauge nearby intergalactic distances for more than a century. But trying to harvest a bunch of these stars was so time-consuming as to be nearly unachievable. So, the team employed a clever new method, called DASH (Drift And Shift), using Hubble as a “point-and-shoot” camera to snap quick images of the extremely bright pulsating stars, which eliminates the time-consuming need for precise pointing.

“When Hubble uses precise pointing by locking onto guide stars, it can only observe one Cepheid per each 90-minute Hubble orbit around Earth. So, it would be very costly for the telescope to observe each Cepheid,” explained team member Stefano Casertano, also of STScI and Johns Hopkins. “Instead, we searched for groups of Cepheids close enough to each other that we could move between them without recalibrating the telescope pointing. These Cepheids are so bright, we only need to observe them for two seconds. This technique is allowing us to observe a dozen Cepheids for the duration of one orbit. So, we stay on gyroscope control and keep ‘DASHing’ around very fast.”

The Hubble astronomers then combined their result with another set of observations, made by the Araucaria Project, a collaboration between astronomers from institutions in Chile, the U.S., and Europe. This group made distance measurements to the Large Magellanic Cloud by observing the dimming of light as one star passes in front of its partner in eclipsing binary-star systems.

Hubble’s Paradox –“Constant in Space, Not in Time”

The combined measurements helped the SH0ES Team refine the Cepheids’ true brightness. With this more accurate result, the team could then “tighten the bolts” of the rest of the distance ladder that extends deeper into space.

So, what could explain this discrepancy?

One explanation for the mismatch involves an unexpected appearance of dark energy in the young universe, which is thought to now comprise 70% of the universe’s contents. Proposed by astronomers at Johns Hopkins, the theory is dubbed “early dark energy,” and suggests that the universe evolved like a three-act play.

Astronomers have already hypothesized that dark energy existed during the first seconds after the big bang and pushed matter throughout space, starting the initial expansion. Dark energy may also be the reason for the universe’s accelerated expansion today. The new theory suggests that there was a third dark-energy episode not long after the big bang, which expanded the universe faster than astronomers had predicted. The existence of this “early dark energy” could account for the tension between the two Hubble constant values, Riess said.

Another idea is that the universe contains a new subatomic particle that travels close to the speed of light. Such speedy particles are collectively called “dark radiation” and include previously known particles like neutrinos, which are created in nuclear reactions and radioactive decays.

Yet another attractive possibility is that dark matter (an invisible form of matter not made up of protons, neutrons, and electrons) interacts more strongly with normal matter or radiation than previously assumed.

But the true explanation is still a mystery

Riess doesn’t have an answer to this vexing problem, but his team will continue to use Hubble to reduce the uncertainties in the Hubble constant. Their goal is to decrease the uncertainty to 1%, which should help astronomers identify the cause of the discrepancy.